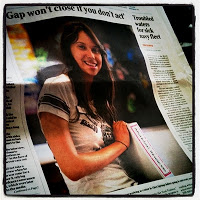 Politicians say some stupid stuff sometimes. It’s part of the compromise. Part of the game. If you want to be in charge of a group of 22 million odd people, then you have to ‘say the right thing’ I guess. The right thing, being what appeals to the majority.
Murris know this best. Murris know that you have to live with the rhetoric floating around out there, the rhetoric about you and your life, your kids, how you live, what you say, what you look like…..

All the while you get on the business of being a person.

Occasionallly a White pollie will get it right. Paul Keating’s Redfern speech is the one that sticks in my mind.

And Julie Gillard’s comments today? Well. She may as well be John Howard. I have to admit, JG scared the crap out of me on the first day, ‘I believe in a government that rewards those who work the hardest, not those that complain the loudest’. Oh God help us!

And well, yesterday she nailed it,

“A call to every person, to every family, to every community: to take care of your children; to take a job when you find one; to create a safe environment; to send your kids to school, pay your rent, save up for a home; to respect good social norms and to respect the law; and to reach out to other Australians,”

I remember the first time I heard about Closing the Gap. Aunty Jeanie Phillips was handed me a wristband about this new program that her church was working with. It was years ago at Musgrave Park. It seemed like a reasonable enough idea.

But now, Closing the Gap, has turned into a judgement show. A voyeristic, paternalistic, victim-blaming, finger-pointing farce. Reading JG’s speech, reinforces how policy is framed around the Aborigine as freak. If you behave outside of the ‘norm’, then YOU are at fault. Like the  ‘Biggest Loser’ contestant who is positioned as a gross, slothenly slovenly, fat, lazy, sub-standard person, who if they ‘altered their behaviour’, would become acceptable, Aborigines in JG’s framing, are responsible for their own situation.

The easiest way to abbrogate responsibility is to make the victim the one to blame. Once again, Aboriginal People don’t get to be human – to have emotions, shortcomings and strengths, triumphs and tragedies, love and hate, to experience joy and sorry. Like the subjects of the anthropologists’ studies over the past two centuries, Aborigines continue, to be the subjects in someone else’s story, and losing contestants in someone else’s game show.

Update: Bev Manton, Chairwoman of the NSW Aboriginal Land Council also responded to Julie Gillard’s Speech in an article, A national disaster waiting to happen on The Drum.