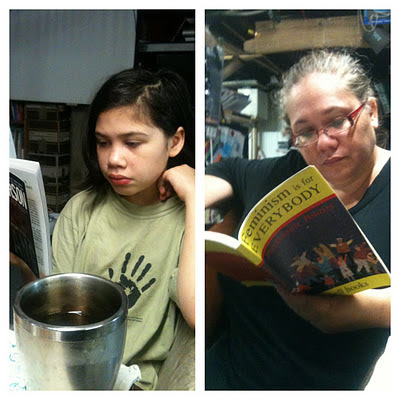 I think it will be quite a challenge for me, not because I find reading problematic, but because I read alot of stuff online, and in order to read a book, I have to be offline (even reading an ebook means I have to just read the book and not be tempted by the hyperlink (confession: I have an addiction to the hyperlink [you just never know where it will take you!])

It was called Feminism is for everybody by bell hooks. And it was/is fantastic! I thoroughly recommend it.

My biggest takeaways from this book –

See how she uses feminist movement? It’s like it’s something that isn’t set in time (ie. the 1960s or the 1970s) but is ongoing and continuous and never-ending.

There is so much good stuff in this book that I’m just going to have to buy a few copies and give them to all my children.

PS: Thanks to Sandra for lending me the book. Loved it!

Next book: I’m going to cheat and read a book that I need to read for work. It’s called Before the Aeroplane Dance. It’s going to be tough going as I have so much on this week. Onward…..