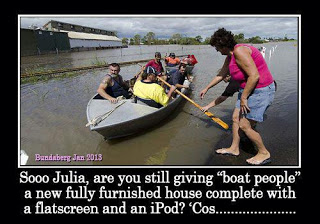 I really do loathe this racist propaganda. We can’t just let the floods be what they are, we have to somehow use it as an opportunity to remind the world that underneath all the flood water, there still is a racist undercurrent. Can’t just be human, and be in need from other people and communities. You just had to didn’t you….
Where’s the racism? Well let’s start with the sexism –

Now to the racism –

This garbage keeps polluting my Facebook stream. For god’s sake, get a critical mind and think before you randomly “like” this shit.