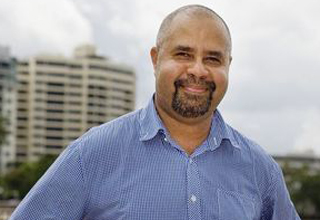 I’m going to devote a post to this not just a status update.

Woke up this morning (checking FB before I got out of bed, like you do) to the news that deadly Murri man, Billy Gordon has been pre-selected to run in the next Federal election for the seat of Leichhardt.

I know he’s been involved in the party for a long time, has done all the hard yards, and this is a well deserved win.

He, and his team, have a big job ahead of them.

It’s a large and incredibly diverse region of Australia – from Cairns city, the whole of the Cape and right to the top and outer islands of the Torres Strait. How does one get around to meet all those people? How do you represent a bank worker from Edgehill AND a grandmother on Saibai? You need to bust your guts, be an incredible communicator and spend a heck of a lot of time in small planes.

He also has the added “bonus” of being Indigenous. Shouldn’t be an issue? Of course it is/and will be an issue. And the first time he has to ignore Indigenous community wishes in favour of ALP policy, the spotlight and pressure will absolutely be on him. Not everyone understands the complexity and the pressure that being in a party brings. Billy comes from a strong family and is a strong community man. Let’s hope that people in the community remember this, and that while he wears the ALP hat, there are things he can and can’t say for the time being.

His other challenge and that for his team, is “convincing” the non-Indigenous electorate that he represents them too, knowing full well that White candidates don’t “need” to convince Murris that they represent them.

It’s going to be exciting year in the lead up to the election. And should Billy cross the line, it will be an exciting first term.

Wishing him and all his team the very best for this crazy journey. I might have to come to Cairns in September and hand out how-to-vote cards.