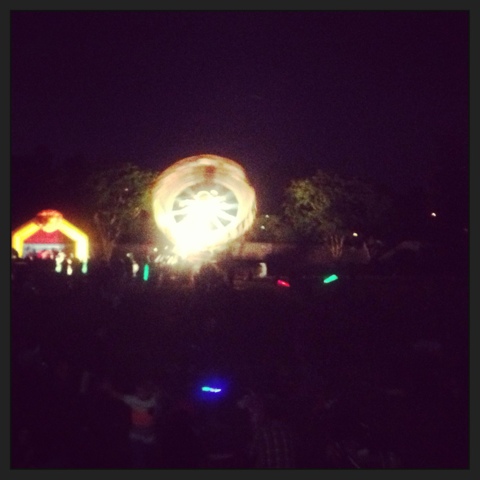 When I was a kid, we would go to the Ekka each year. We first did the “government” pavilions. Here we’d pick up the free “sample” bags – colourful brochures, free pencils, posters. We’d look at every stall up every aisle. From there, it was over to the smelly pavilions to look at the animals – cows, sheep, the crazy and unreal looking chickens and birds. Then it was the art and craft section. I remember envying the school kids whose project books were so incredibly neat that they’d win a place in the glass cabinets. I could never achieve perfect handwriting and colouring and shading that my best mate Susie could. I would aspire but never be good enough for the Ekka. Then it was over to produce – pretty boring stuff but they sure could make fruit into interesting displays. And finally it was over to the cars and tractors.

Once the free stuff was over we were pretty knackered, but there was plenty of energy left over for sideshow alley. We weren’t that flush, so it was usually the Ferris Wheel and one other ride, and a game. I remember sometimes winning a dodgy little prize on the clowns. I think the clowns, and my really poor form on them, made me distrustful of games and gambling. I could never understand why it was so bloody hard to win one of the good prizes. I’d concentrate that hard to make the balls fall on the right numbers. I think I learned early that “the house” will win most of the time.
When the day was almost done, it was over to the sample bags. The day/night always ended with fireworks, singing out the colours we thought would go highest and occasionally getting ash in our eyes. I remember the sounds, smells and humanity of the Ekka so vividly. And I remember with fondness and nostalgia. Yet as a parent I have been a complete traitor to my “The Ekka” memory.
Our kids have been a couple of times to the Ekka. They’re all teenagers now, yet they’ve been two or three times at the most (and I’m sure my dad took them at least one of those times). I’m really clear why we rarely go to the Ekka and it’s because with four kids and two adults it’s absolutely not economical. I don’t know if it was value for money when my parents took us (relatively speaking of course), but I can’t justify it to the family budget.
In place of the Ekka, we’ve done a few different things. A couple of times we went to a smaller regional show at Lawnton – there are way less crowds and the entry costs are heaps cheaper. A couple of other years I’ve given the kids a budget and let them go crazy at the school fete which sometimes is around the same time. Other times, in leaner years, they’ve settled for a movie.
They’ve never complained it fussed about not going. I really think they value that we do something together, rather than the drama of an Ekka trip.
Tonight was one of those years where I could swap the Ekka for a school event – the kids’ old primary school hosted their monthly markets today (the People’s Day, a public holiday) with rides, show food, like fairy floss, sample bags, and fireworks.
How wonderful that our dollars went back to the school, that we could walk to the event, and that so much of what you’d get at the Ekka was there.
Yeah. While I love my Ekka memories, I don’t regret that we chose to give our kids different memories.