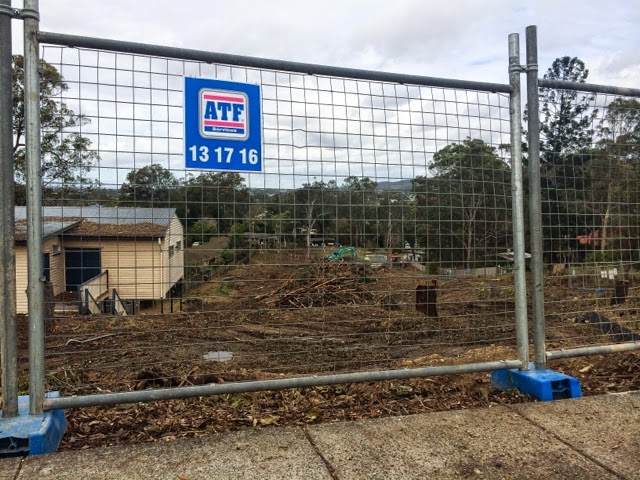 Late last week, we woke to the felling of trees less than 100 metres away. I’m not sure the image really shows how much has been lost. I suppose it’s not on an Amazon scale, but in our little suburb, in North-West Brisbane, not far from the CBD, it feels enormous.

Over the past few years, Everton Park has become a-buzz with the progress termites intent on a sub-dividing one house allotments, and turning them into two house spaces. In the early days, it shocked me. How could they? There’s no yard? What about the kids?

Over time though, with my eyes open to how others’ live, I have begun to relax my standards. Everytime I went to Sydney, I noticed that inner-suburb yards are rarely as big as ours in Brisbane, that it’s normal for there to only be a metre between dwellings. Perhaps it’s not so bad after all. We all know that urban sprawl isn’t great. We should suck it up, reduce our allotments and let more folks in. On one level I totally agree with that sentiment.

It’s the initial shock that is the worst. Each day as I drive past the above scene, I’m reminded of what’s not there. The skyline is different. It’s naked. It’s bare. It makes me jolt, or “start”. Having lived here for forty-odd years, skylines tend to grow with you. When it’s suddenly altered, it’s not real.

I’m betting that the bulk of the construction will be done by Christmas. They move lightening fast around here. So the new skyline will soon be formed. This time next year, we will have moved on and forgotten.

It’s when the scars are fresh, that we feel it most. Walk past and you can smell the fallen trees. But the scars will heal, and our suburb will take on its new shape. And only us oldies will remember when …

There is another side to this story. The little building on the left is the old scout hut, and the trees in front of the hut were not part of the development. However the Brisbane City Council refused to listen to local people who requested that the trees be retained. The bush land was home to many birds and possums all of whom would no doubt be “feeling it” this week.