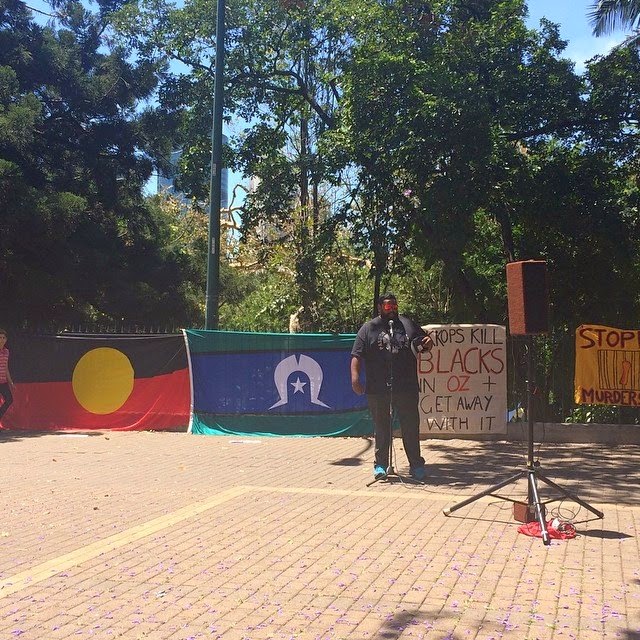 I’m on the bus on the way home from the National Day of Action for Miss Dhu, a young women who died while in police custody a few months ago, and my mind is a haze.

Miss Dhu ended up being part of the criminal justice system because of $1000 in unpaid fines. Two days later she was dead. Her death represents a sickness in our society, and in the systems we have created. Systems that do not see Aboriginal people has being human. Systems that abrogate responsibility when someone dies. Brother Ricky Pascoe today said

“the system is the prison, not just the room with bars”.

How true is this statement? We are all part of a much broader system, and any “choice” we have is qualified and limited. Some of us are better placed than others to navigate the world, and this privilege means that it can be hard to see what life is like for those who live outside it.

But there are too many rules, often unspoken, or even at times ever-changing. So many rules that if you’re not equipped you will more than likely fail. The criminal justice system for too many, is the end of the line. Sister Debbie Kilroy said today

Too many Aboriginal women and men end up in jail. What impact does this have on our community’s greater well-being? How can we allow a generation of women and men to be lost to incarceration?

As a mum, I cannot imagine how Miss Dhu’s mother and family must be feeling today. It may be some small consolation to them that people from all over Australia are thinking of their daughter. But their grief is unimaginable to me. As we stood there this morning, one sister requested that Archie Roach’s song,  Child play. We bowed our heads as this beautiful, sorrowful yet hauntingly appropriate hymn was played.  So many, too many souls now gone. Few stood there today without tears and breaking in their hearts.

The Royal Commission into Aboriginal Deaths in Custody was a comprehensive investigation and clear direction forward into matters of black deaths in custody. I remember how excited we were when the report was published, followed by anger when, over the proceeding decade, it became clear that few of the report’s recommendations had been or would be implemented.

The ongoing over-representation of Aboriginal and Torres Strait Islander people in the criminal justice system is a matter of national importance. Yet it receives scant public interest, and apparently even less policy interest. Aboriginal and Torres Strait Islander people are more likely to be killed while in police custody than by the so-called menace of terrorism. Yet where are the advertising campaigns and press interest? If you’re not seen as human, your deaths and your sorrow are not as important as others.

I have a (slight) hope that Miss Dhu’s unnecessary and senseless death puts a spotlight on Australia, and leads to change. We must continue to talk about the this issue, to keep it in the national spotlight, whether it be through the streets, or in other ways, like art, movies, literature, academic writing, classroom activities. We must continue to keep talking, for to stop means we no longer exist.

My thoughts are prayers are with Miss Dhu’s family, and many other families around the continent, whose loved ones were taken from them too early.