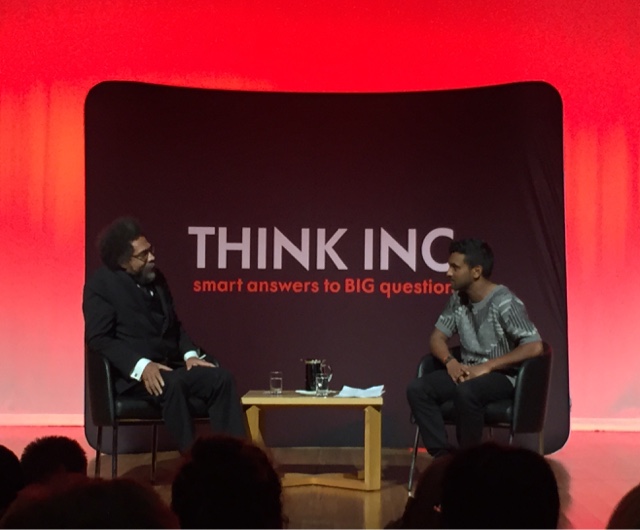 Last Thursday evening we had the pleasure of seeing visiting African-American scholar Dr Cornell West in conversation with Nazeem Hussain at the Brisbane Convention Centre. Dr West is touring the capital cities at whirlwind pace.

Before the start of the event, Dr West made a point of visiting the Brisbane Sovereign Embassy at Musgrave Park. He also gave the stage up for Wayne Wharton and Bo Spearim to speak from the stage before he and Nazeem came on. Aunty Jean Phillips (during question time) and Wayne Wharton both said to the audience that few of the people who attended would ever attend an Aboriginal event.
I guess that’s one of the things to note, Australia doesn’t really have a tradition where a thinker like Dr West could flourish and make a career. He’s a public speaker as well as an academic. He’s also a published author and has recorded spoken word albums. When you watch him, he has a way of speaking that’s like performance or spoken word, or rap.
His insights into race relations were a little too sophisticated for QandA earlier that week, and are a little too sophisticated for Australia generally.
It was a worthwhile event, and I’m glad that Indigenous Australia was recognised by Dr West throughout his answers. He continuously referenced our context and didn’t just refer to the U.S.
I hope the organisers have met their criteria for a successful tour and it happens again. It would be good to see more events like this, including ones a little less “blokey”. I’m surprised there were no books for sale before and after. I’m sure the organisers would have made a few extra dollars.

One thought on “An evening with Dr Cornell West in Brisbane”