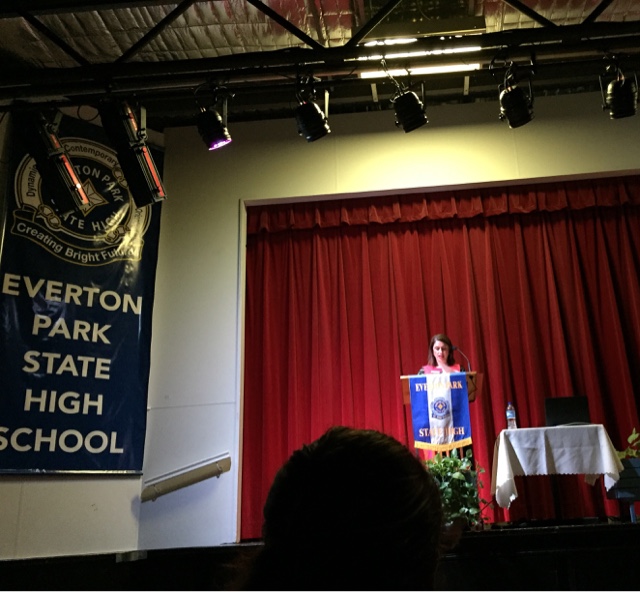 As I sat there listening to the Principal’s speech, I remembered how many conversations I used to have with (usually) mums at the primary school about Everton Park State High.

So many were adamant that it was a bad school – that it was rough, that it didn’t even deserve consideration as an option for their children. When pressed, not one parent could point to an actual incident that led to them having this opinion. It was all gossip and assumption.

In 2013 the school was on the closure list and it was because of the dedication and commitment of parents, staff and community that it remained open.

Ms Sue Wallace the Principal, in her speech tonight made mention of a number of achievements including the decision today that it would be made a Queensland Independent School. Other achievements included being a partner with Queensland Academies to provide accelerated learning (some of the year 7s are doing year 9 mathematics), and finally some investment by the state on infrastructure with $500K outdoor education area approved.

It’s not a perfect school by any means. There are plenty of things that need attention. Clearly no one there appears to have heard of a welcome/acknowledgment before. (On my to-do list!!)

But really, it’s a decent local school that deserves community support. And it deserves to have its ‘story’ re-written.

It’s a place I’m very happy to lend my time and energy to.

Image: A school hall / auditorium. A young woman stands at the lectern on the stage,  a red theatre curtain behind her. A large banner to the left, with the text “Everton Park State High School”.