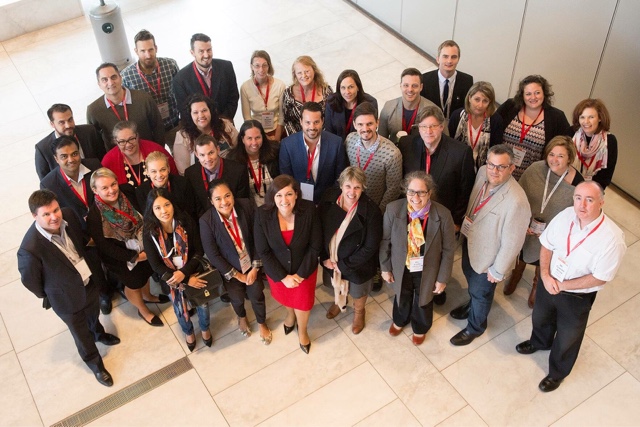 What is a cure for overwhelm and stress? One cure is drop everything, quit your responsibility, just stop and walk away. Another option is to pull in the reins, take one step at a time, one foot after the other. A third option is to be asked to step up even further, to be called-to-action, and to be reminded of the long game.

I’ve done the first only a few times, the second is more my style and is what I’m used to. Taking deep breaths along the way. And the third comes along occasionally. It’s what I experienced this morning.

A month or so ago I was approached by Michelle Hollywood from InfoExchange, the social enterprise, about the Year of Digital Inclusion and the Digital Champions programme. In addition to finally working out what ‘Advance Queensland’ was all about, we had a good yarn and she told me about the amazing work of InfoExchange. She was interested in the work I was doing, I particular with the SEQICC, and spoke about the various projects I’d done in a digital space – Deadly Bloggers, WhichWay for Social Media, as well as the informal work I do every day in helping folks with digital tools. She suggested I would be a candidate as a Champion. Skeptical, I approached the SEQICC to nominate me, a few weeks later my application was accepted.
However, it’s not that simple is it. Not in my head it isn’t. Over the past two weeks I’ve had the worst bout of Imposter Syndrome. It’s been energy sapping, mind-bending even. It’s impacted on my productivity so incredibly over the past fortnight that it’s going to take me a month to catch up. My imposter syndrome looks a bit like: What if you all find out about me? And you finally realise I have no friggin idea what the hell I’m doing?
In this past month, I’ve been nominated as a Digital Champion, been invited to sit on two conference panels and  asked to be a referee for a Promotion round for a Senior Academic at a university because I’m ‘a leader in the field’. Are you all f–king kidding me? I know this reads like a really crap humble brag, but it’s not. I’m serious. Two nights ago, I’m standing in my kitchen, balling my eyes out. “What the f–k am I doing? They’re all going to find out I don’t know anythjng. I didn’t ask for this!!! Why can’t I say no!?!?!?” (It wasn’t a pretty sight I can tell you)
Finally after two weeks of panic, I feel like my head is clearing today. And it’s been helped from a couple of things.
The first was a tweet by Anil Dash two days ago: 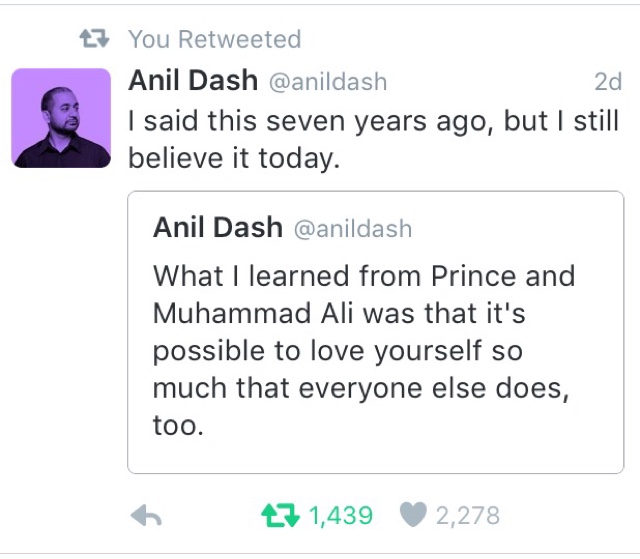 The moment I read it, it punched me in the gut. I had a physical reaction to it. What if? What if I could really love myself – ALL of me?  What if I could own the fact that I have no idea most of the time? And ‘own it’ not just on my ‘good’ days? I think part of my strength is that I never profess to know the answers. I’m rarely 100% sure of anything. I’m always asking questions, always trying to fit the puzzle together.
The second thing that’s helped to clear my head happened this morning. Minister Leeanne Enoch called us – the Round 3 Digital Champions – to action. She asked for our help – help to do our bit –  that we’re working to try to ensure that all Queenslanders have access to digital tools and have digital literacy skills. Helen Milner from the Tinder Foundation provided us with detailed evidence about what digital literacy can bring individuals and communities, and how the costs of providing these support structures are far outweighed by the economic and social benefits that it brings.
I was/am inspired to get out of my head and get into action. So much of the work I do fits into this bigger vision, it’s just that it’s not clear nor delivered strategically.
So I’m putting the Imposter Syndrome in the cupboard for now (it will be back later I’m sure), and I’m announcing that I’ve got plans for at least three Digital Inclusion activities before the end of the year. One major event in October for Indigenous Business Month, and two minor events on either side.
I know I haven’t cured my overwhelm and stress by adding extra commitments to my calendar. But I have no time to let that self-doubt in right now. It’s to put my skills to the test.
I have to be here for something bigger than me.