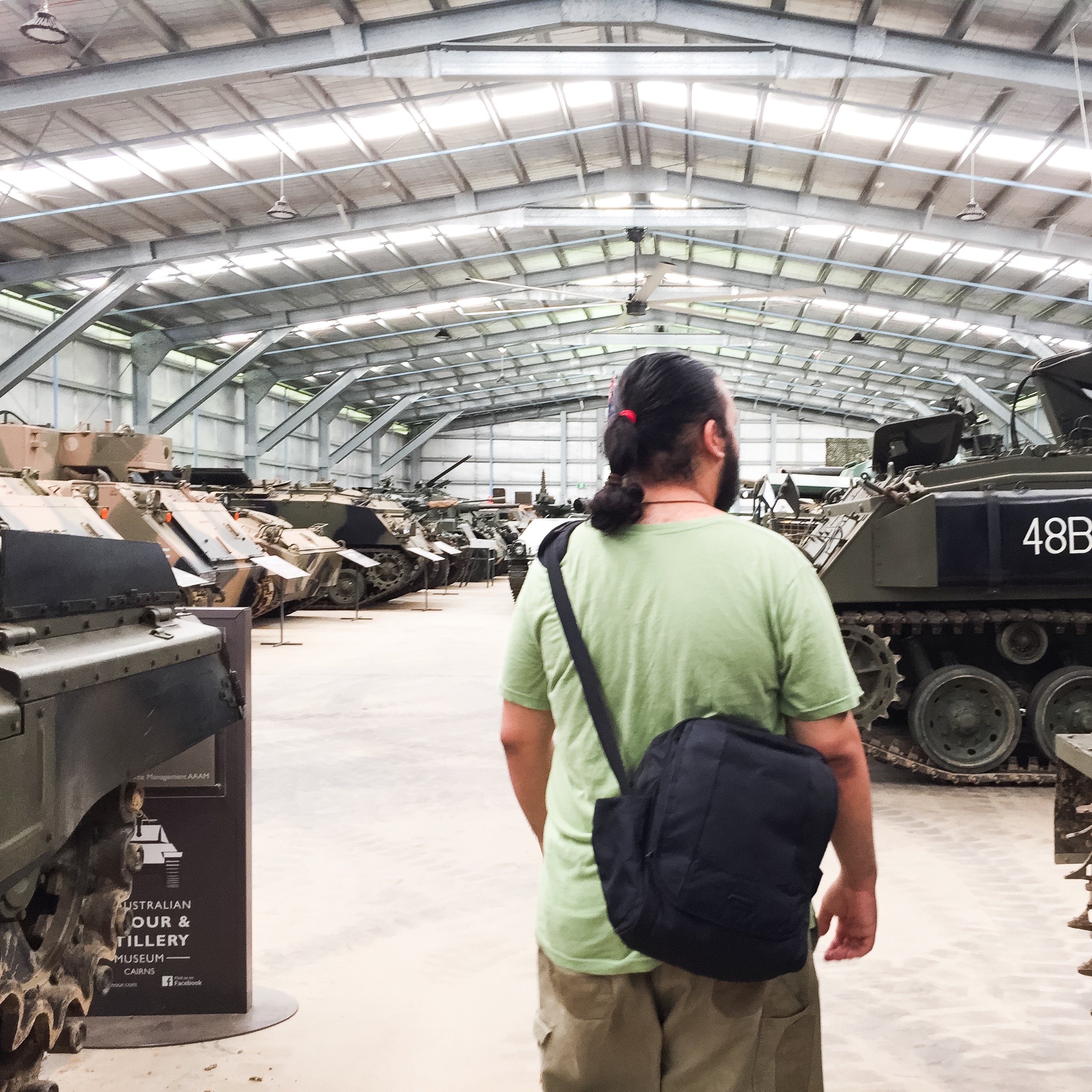 Today I bought my second eldest young man – I can’t say boy anymore – a yearly pass to the Australian Armour and Artillery Museum for his twentieth birthday. Located just north of Cairns heading towards the northern beaches in Smithfield. It was fantastic. He absolutely loved it. I’m sure he nearly fainted when he saw the Churchill tank out the front.

Each exhibit was signed really well – lots of clear explanations and the logic of the curation was easy for the non-amour enthusiast to grasp. Though really this is made for people who love this stuff.

He knew most of the pieces that were there. I was amazed at his general knowledge of the pieces. As we walked to the next tank, he’d be telling me about it and I’d read the sign and 9 times out of 10 he’d got it right.

I have to admit that I thought there would be maybe ten or twenty tanks and was quite frankly waiting to be bored out of my mind, but there were so many pieces it was almost overwhelming. It’s an odd thing though to be excited for the exhibition even though you know that many of the pieces had ‘seen action’ and would have been part of some awful and inhumane history. way more than that. He absolutely loved it. He knew most of the pieces that were there.

There were exhibits from most of the major conflicts. I had no idea there were so many different kinds of tanks and it was exciting and sad at the same time. I have to admit that I thought there would be maybe ten or twenty tanks, but there were way more than that.

I’m not one for armour or artillery, but as a museum it was fascinating. 98% of the exhibits had signage and very clear explanations. The layout of the full space is was really well thought out. Perfect for the Cairns weather it’s located underneath a massive steel shed – away from the rain. There was plenty of parking and very easy to find with good signage. There is a festival – aka AusAmourFest in Cairns in September this year and I’m hoping to find a cheap flight for him and a friend and send them up to have a ride on a tank or two, and meet other tank heads.

Oh … and the gift shop is to die for!

Apparently the museum is a private museum and was established and is supported by a single owner – someone who became wealthy, loved tanks so built himself a museum.

Some individuals people build art museums while others build artillery museums. Who knew!