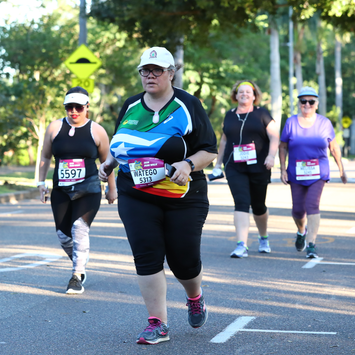 This time last Sunday I completed my very first run of 5 kilometres at the University of Queensland Twilight Run. I was running as part of the #ISeeDeadlyPeople team with some of the other Brisbane Deadly Runners crew.

My official time, which I received by email today was –

Unlike my last ParkRun though I didn’t get carried away with the crowd, but started the race at a really nice easy pace – so easy the walkers were passing me. But that’s the point I think – I’m learning to run and while I can walk faster than I can run – I’ll never become a better runner if I don’t just get running.

My race
Always the first kilometre is the worst. I want to give up. I spend the bulk of the first kilometre asking myself what the hell I’m doing this for. It kind of reminds me of how gun-ho you get when ‘hey let’s have another baby’ and then when labour really starts and you go ‘oh that’s right childbirth really is the worst pain on the planet’. It’s like that. Let’s run 5kms, oh shit, it really is hard work.

The 5km course is actually pretty good. You go down along the river and back again, then over the bridge, down and under the bridge and then back along the river to the end. I had a bit of a hard time coming off the bridge the first time – I found it difficult running down even just the slightest slope. Running back up the bridge wasn’t too bad. I was very slow and the young race attendant at the top of the bridge gave me lolly which was just perfect. I was also distracted by the view and the poetry on the bridge path (thank you BCC public art people). The 3rd kilometre was easily the best – I felt really relaxed and just had a nice gentle pace, while at what was probably 4.5km I wanted to give up. But I just kept going.

The next day Antonia, the Brisbane Deadly Runners head coach, said that that feeling – of just having to talk yourself into NOT stopping, is what EVERY runner does regardless of how long they’ve been doing it and how fast they are.

Distance running is really mind over matter. Fitness is involved of course – I was on my feet and moving for 55 minutes. But in the end if I did really want to run the entire distance I just had to will myself into it.

Thanks Facebook
I’m so happy I did it – of course I told Facebook all about it when I’d done it – and everyone was really lovely. I won’t pretend – my communities on Facebook – Deadly Runners, #FatGirlRunning and everyone else on Facebook – has been hugely influential in driving my running goals. I get inspired by others, so much so that I stupidly/optimistically want to keep going. Yes – I am going to start training for 10k.

Now to get back to training. One step at a time.