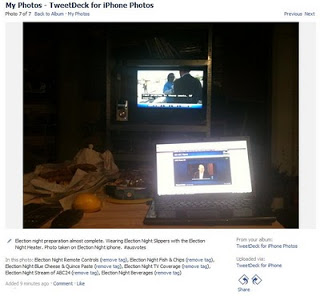 I know its so daggy but I just love election night. I know that elections in our modern day two-party sytem is limited by spin not real analysis and debate.

I know. But I love it. I don’t know why. I didn’t grow up in politically savvy household. We weren’t one of those cool families I occasionally read about in autobiographies of famous and wonderfully smart people. You know – the ones where the family would sit around the dinner table each night and have fabulous political debates with the kids fully participating. Nup. Not us. So I have no idea why I love elections so much. I get annoyed when people vote informal – even though I appreciate that people feel like they have no choice. I know that our so-called democracy is completely exploitabe and designed for well-resourced groups and that marginalised groups unable to flex their electoral power as a lobby group are completely ignored.

But I also reckon its great that most of us do not have to fight to vote, that there is no danger to us personally if we vote (even if we vote informal!). I get so shocked when I read about persecution in other countries and how under-resources some electoral systems are. Like in the US, where some communities do not have functioning voting equipment. We live in a such a nanny state in Australia sometimes, but I love the the AEC exists and I loves its neutrality (for the most part). I love that the when I vote at my local school hall, other people voting in other school halls go through the exact same process.

Writing this, the pollls are about to close soon. And the counting will begin.

I know its daggy and simplistic. But I do love it. Its Election Night 2010!

Update: Its Friday – 6 days post election – how insane has this week been. This is my new favourite website.