First swim of the year down at Cudgeon Creek this afternoon. And despite a little sunburn (what was I thinking not putting on sunscreen!?!?!?), I continue to be amazed at just how I’ve learned to give-n0-fcks about going into the water.

END_OF_DOCUMENT_TOKEN_TO_BE_REPLACED

How many challenges can I do in one year? I wish I could clone myself.

END_OF_DOCUMENT_TOKEN_TO_BE_REPLACED

This week Vernon and I headed to Woodford Folk Festival to participate in the Speakers and Ideas stream curated by Michael and Ludmila Doneman of Edgeware Creative Entrepreneurship.

For the oddest reason, I seem to fail at my own Deadly Bloggers 52 Week Blogging Challenge (1 post each week for 52 weeks), but #blogJUNE (1 post per day for 30 days) seems possible. Don’t ask me. I’m just odd.

END_OF_DOCUMENT_TOKEN_TO_BE_REPLACED 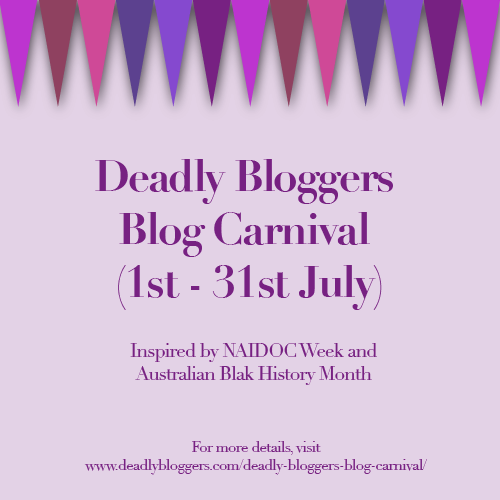 I spent most of Saturday on the computer creating graphics for the inaugural Deadly Bloggers Blog Carnival. I’d been thinking about doing something for ages but I just couldn’t work out the structure. Then it hit me part way through last week.
On Saturday, I spent the day writing and updating posts and creating the graphics. It’s so bloody purple!! When I moved Deadly Bloggers to its own site from Blogger, I had to decide on a colour scheme – and purple it was.
One of the joys or being the owner of it, is you get to decide.
If you read this blog, I hope you’ll take some time to visit and follow Deadly Bloggers (the blog) and all the deadly bloggers who make it up.
And if you’re on Twitter, the hashtag is #dbBC

One of the participants last week at the Queensland Indigenous Youth Leadership Program, asked me why I began blogging.

I originally began in 2008/09 after I attended a workshop, facilitated by Edgeware, but run by Eddie Harran. In that probably only one and a half hour workshop, Eddie explained everything from blogs, MySpace (was dying but not quite dead), Facebook, Flickr, Blogger, WordPress, RSS, Twitter and more. He gave context to the different platforms. I began to understand what things meant, in what order they happened, and importantly, how I could use them for my work.

But really, the answer to the question is, I began blogging for business. I wanted to share ideas about Indigenous education that I felt were being missed. I mean, it’s easy to talk to a group of pre-service teachers, but once they’ve graduated? It’s much hard to capture them. The odd after-school professional development session doesn’t really help people who know so little.

I had built websites from templates before Eddie’s talk. The first I probably built in the very early 2000s. It looked terrible. I continue (mostly) to build my own. I care less for the look of a site, than I do for the site’s organisation of information and the quality and usefulness of its content.

Why do I blog now? I still blog for business, but on this space in particular, I blog for myself. I rarely tweet out what I’ve written, I don’t count or measure the statistics. And the odd person or two eventually finds their way here.

Here. I blog for me.

Update: I was cleaning up the categories on Deadly Bloggers, and found this post I wrote in 2012. It relates.

You may have noticed I’ve done a bit of blog maintenance this past weekend. I think the end result is way to busy and not clear, but I think it will evolve as I sit with it more over the next few days.

During the second last half of the year it occurred to me that I needed to be blogging more. My output for 2012 was decidedly lower than in the previous years. I look at folks like Anita Heiss – a prolific blogger – and I cringe at my efforts.