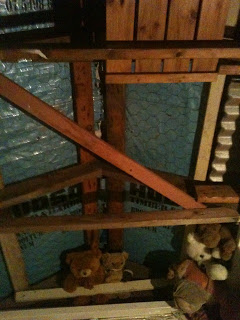 I meant to post this at the end of the holidays but got wrapped up in other stuff. So better late than never I guess.

Michael and Annie were determined to have a “sleep-out”. I was determined that they wouldn’t. They won.It is just the school holidays.

What made this most memorable for me was how they organised themselves. They both showed amazing ingenuity and energy organising the bedding, an electricity source, the all important entertainment devices (iPod, TV, radio), food (for breakfast the next morning including a Thermos of tea), and a couple of cuddlies. They had all this prepared even before I’d even said I’d let them stay outside for the night.

I was surprised but proud that they felt completely safe sleeping in the cubby all night. Unlike a lot of houses in Brisbane these days we don’t have high fences so we’re pretty much exposed to the street.  I feel a bit regretful sometimes, like I bet a number of modern day parents do, about how kids are basically bubble-wrapped. The free-range kids movement is a response to this. When we were kids we used to go down to the creek and collect guppies and tadpoles, were always heading down to the park by ourselves. While my kids have been pretty free-range within our fenceline (they own the yard – always building dams and bridges, planting and replanting, running all kinds of experiments and digging holes and irrigation systems etc), its been difficult for me to be comfortable letting them loose outside the yard. So I was very pleased that the thought of being outside during the night wasn’t fearful for them.

The other part of the night that was really great was just how excited they were when I eventually said yes. They were so surprised and grateful, they just beamed. I turned off the lights, locked up the house and laid down on the hard floor of the cubby in between two very excited little people.

I couldn’t believe just how proud they were of themselves and happy that I had supported their long-held dream to sleep in the cubby.

Despite the hard floor of the cubby that night (and for two nights following), possums fighting and mating on the roof and the wonderful (not) aroma of the chook pen, life was completely and utterly happy for them and for me.

If the kids read this post one day when they’re grown up and maybe have kids of their own, I just want to say how grateful I am to them for giving me the chance to revisit unbridled excitement at something so simple. Deadly kids!

Images: Top image is the view from the floor of the cubby. Bottom image is Michael getting me breakfast the next morning.

One thought on “Hard floors and happiness”