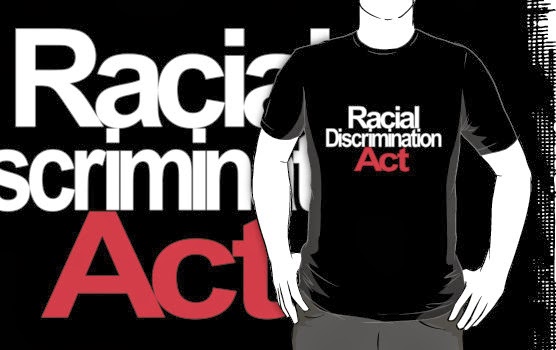 Here is the first shirt design I’ve added to Redbubble. It’s called Racial Discrimination Act. As in ‘act’ don’t react. My explanation of the design,

This work is in response to the proposed changes to Section 18C of the Racial Discrimination Act by the Abbott Government. The proposed changes seek to water down the Act and make it more difficult to fight Australian racism. We believe that we need to act when it comes to Racial Discrimination. We cannot wait until the RDA is changed. We must act now.

I’m selling the shirt to raise the issue of the proposed changes to the RDA, but I’m also using it as a fundraising to get to the WIPC:E Conference in May. I have two papers to present – one with Sam Cook and Juliette Hubbard on Australian Blak History Month, and the other on Deadly Bloggers. I also want to get to WIPC:E so I can write a bunch of killer blog posts for the Critical Classroom. I want to capture voices from all over the globe researching and writing about Indigenous education and culture.

However, as I’m self-employed, I have to get there on my own steam. And I reckon selling shirts is deadlier than selling lamingtons.

If you like the shirt, head to my Redbubble Portfolio. I’ll be adding up new designs soon.

2 thoughts on “Buy my shirt and help me get to WIPC:E”