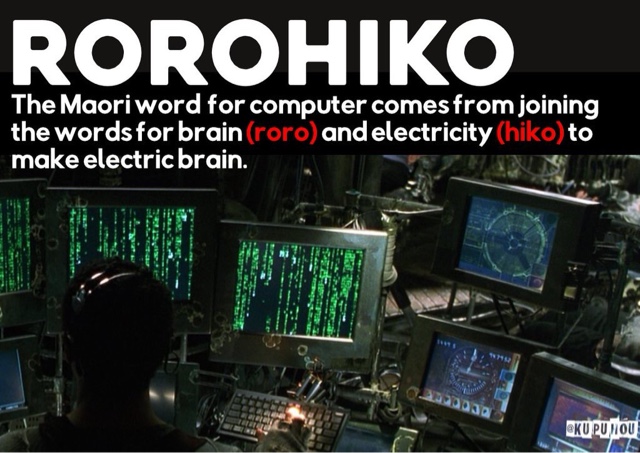 Language is dynamic. We create new words for new ideas, objects, and contexts.

In the past few years I’ve been thinking about language. Well, more accurately, my inability to speak nothing but English. Tonight I read an article (link appears to be lost forever in the stream) about lessons of our forties, and being 46 this year, I’ve realised – rather sadly that I will probably never learn Italian or French or ‘another language’, despite having that goal on my bucket list since the movie came out a thousand years ago.

In particular though, I’ve also been thinking about ‘traditional’ language, and how our family has only a few words in our everyday vocabulary. Oh how I wished we had more. With my children now teens, it’s too late to raise them in a bilingual home, but is it possible that I could start now in time for my grand-children to have a language other than English in their lives?

I recently met an inspiring sistah from Aotearoa who was Samoan, but who spoke six different languages. Tuiloma Lina Samu, a PhD candidate at Massey University was recently in Australia for the UoW’s Reterritorialising Social Media conference and she spoke about Pacifika language and the way in which we make assumptions and understandings from language.

On our last evening together we talked about language and she’s inspired me more to do something. I’m not sure what it will be. Of course, I have no time, but there really is never time for these kinds of endeavours. After listening to the #SovereigntyX panel at Clancestry last week, I’m convinced that this is part of a much bigger nation-(re)building exercise, and as such is vitally important personally and for our community.

One thought on “Is it too late for a new language?”