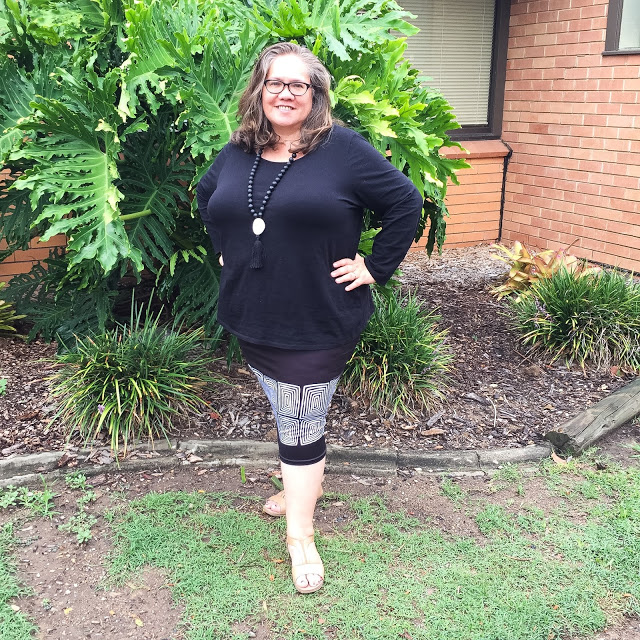 by Leesa WategoDecember 10, 2016December 27, 2016
Last July at Musgrave Park I picked up one of the Dezigna pencil skirts. The first time I tried a maxi-skirt I thought I’d died and go to heaven – so incredibly comfortable and the freedom! Strangely enough though, I’ve found myself in love with the pencil skirt in the past few years despite it being the opposite of freedom.
I’d been eyeing off the skirts by Aboriginal owned and operated Dezigna as they’d been appearing as sponsored posts all over my Facebook for months before NAIDOC. I knew I wanted the black and white Elaine Chambers design. It’s a simple understated design. Before I left Musgrave Park on Family Fun Day, I grabbed one!
So, the verdict?
The plus size is fine for me. I chose a 24 (their largest size) in the Dezigna range which is comparable to a Large in the City Chic pencil skirt (my other fave!). It’s really comfortable to wear and quite cool in summer as it turns out. It’s a mix of Polyester and Spandex so it’s really stretchy with a lot of give.
My only issue with the skirt and one that I had no idea about until I tried it on that night, is that because it’s a sublimated print, it’s not a black skirt all the way through.
With sublimation the fabric is like a canvas that’s printed on. So the black ink/dye is actually printed onto the fabric. It’s not black fabric with white ink/dye printed on. So the inside of the skirt is actually white. When I first started wearing it I was quite self-conscious as it would roll at the bottom and you could see the white insides when it rolled up. Also, when I sit and the skirt is stretched, it’s not really a black skirt but a kind of grey. You can see from the image above, my top is black while the skirt looks like it’s a faded black.
While I was very disappointed, after a few months I started wearing the skirt on weekends. Since about September I’ve been addicted to it. I wear it on weekends with thongs and a t-shirt, but I’m also wearing it for work much more – in the style in the image.
So even though I was initially disappointed – mostly because I didn’t really think about how the skirt was printed – I’m actually really happy with my purchase. I could probably see myself in the Elaine Chambers By the Water design as well. But it’s not just the skirts I think I’ll try. A client of mine was wearing one of the Elaine Chambers Kaftans last week and I might pop out to Clontarf and have a look. I’m looking for a summer ensemble to wear for work. Because Fat + Sub-Tropical Heat + Business / Corporate Wear = Headache.
Head over to the Dezigna website and check out their growing range of clothes. It’s a very exciting time right now as there are quite a few Aboriginal and Torres Strait Islander owned clothing labels up and running. It’s always good to support them.
#OOTD
Top: Autograph
Skirt: Elaine Chambers Pencil Skirt by Dezigna
Shoes: Supersoft Sandals
Necklace: TS
Image: Plus size woman, shoulder length brown hair, glasses, smiling at the camera, standing in a pose – hands on hips, one foot forward. Wearing a block top and black skirt with white print. Black and white necklace. Beige sandals.