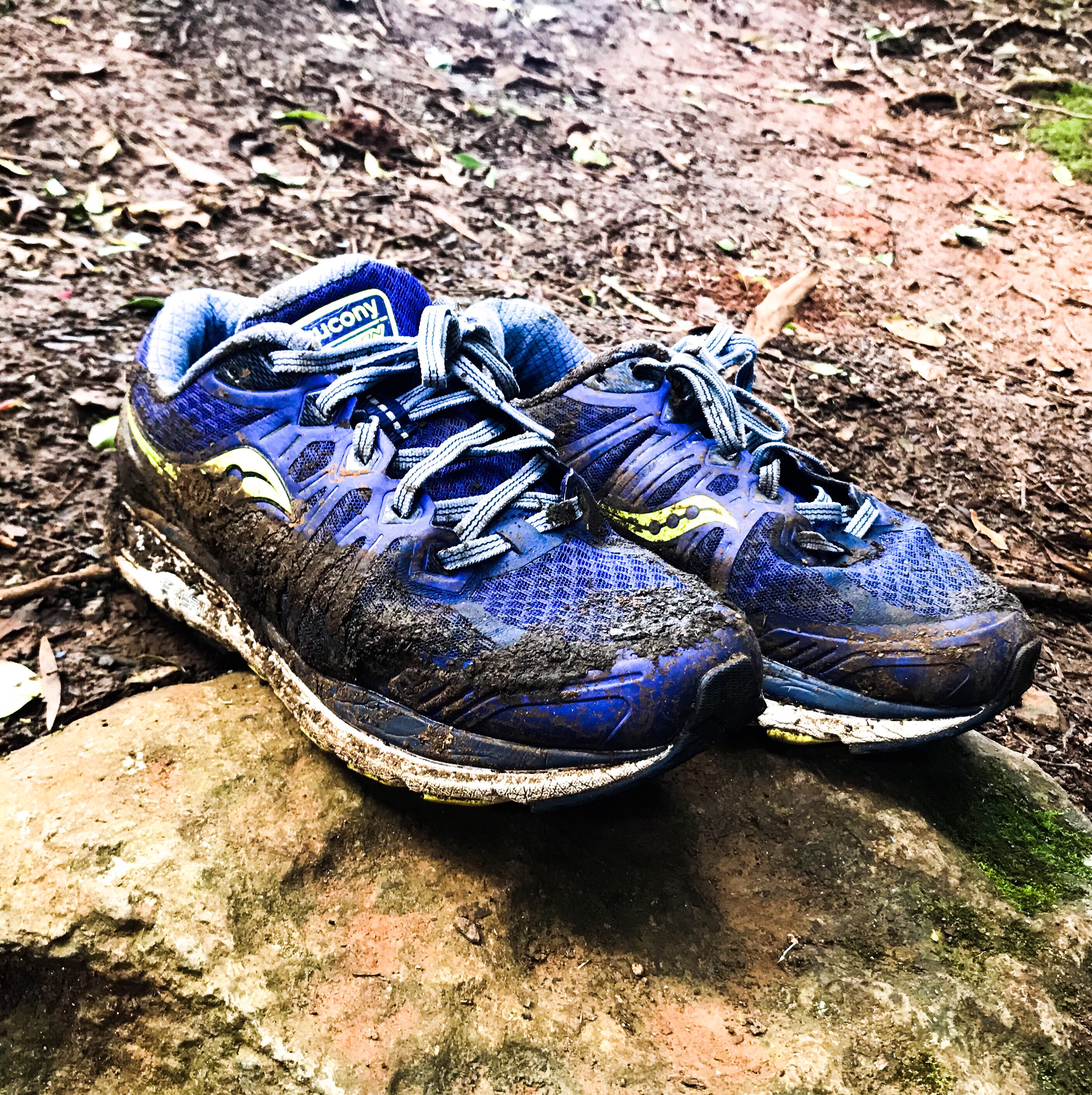 My first trip to Lamington National Park was a nice adventure and I racked up a bit of a walking milestone – a walk over 15k.

We’d decided to book in for a three day/two-night camp. I’ve never been there before so the drive up the mountain was certainly an experience I’ll not forget. Much of the road is too narrow for two cards, so there are many sections where you have to pull over and give way to cars coming down the mountain. It’s certainly not a drive I’d be keen on doing in the dark.

When we arrived we eventually found our spot. It’s an odd camp-ground (I’m sorry I didn’t capture footage of it empty), as the sites are all different sizes and it’s like they’ve just cleared a bit of ground within trees. It makes some of the sites quite private. There is an open ground section where square raised “tent beds”. While there were a few campers, I wouldn’t try it with a camper trailer.

First things first, particularly on a weekend with rain looming, we set up camp. Annie and I had a bit of a tricky time setting up the tarp, and I’m glad we did decide on a tarp as it rained the second day. I can’t believe on the second night when it was really windy that the tarp didn’t fly away. Apparently, I was better at this that I thought I’d be. 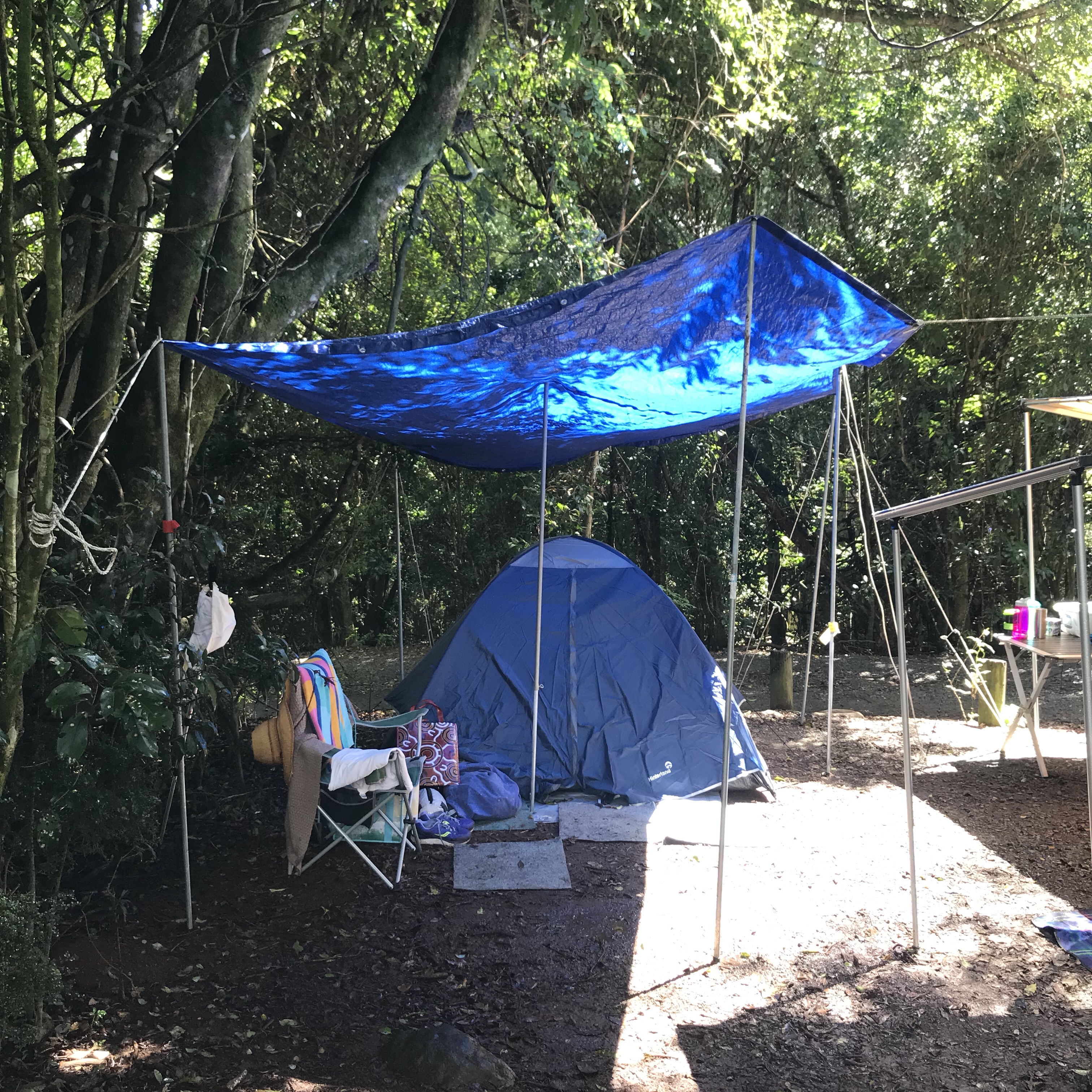 That night before the sun went down we headed up to O’Reilly’s to scope out the walk situation. We did a short walk which included a suspension bridge – a little nerve-wracking as some folks thought it would be fun to jump up and down on the bridge that only suggested 6 people on any given section of it. Awesome. NOT! 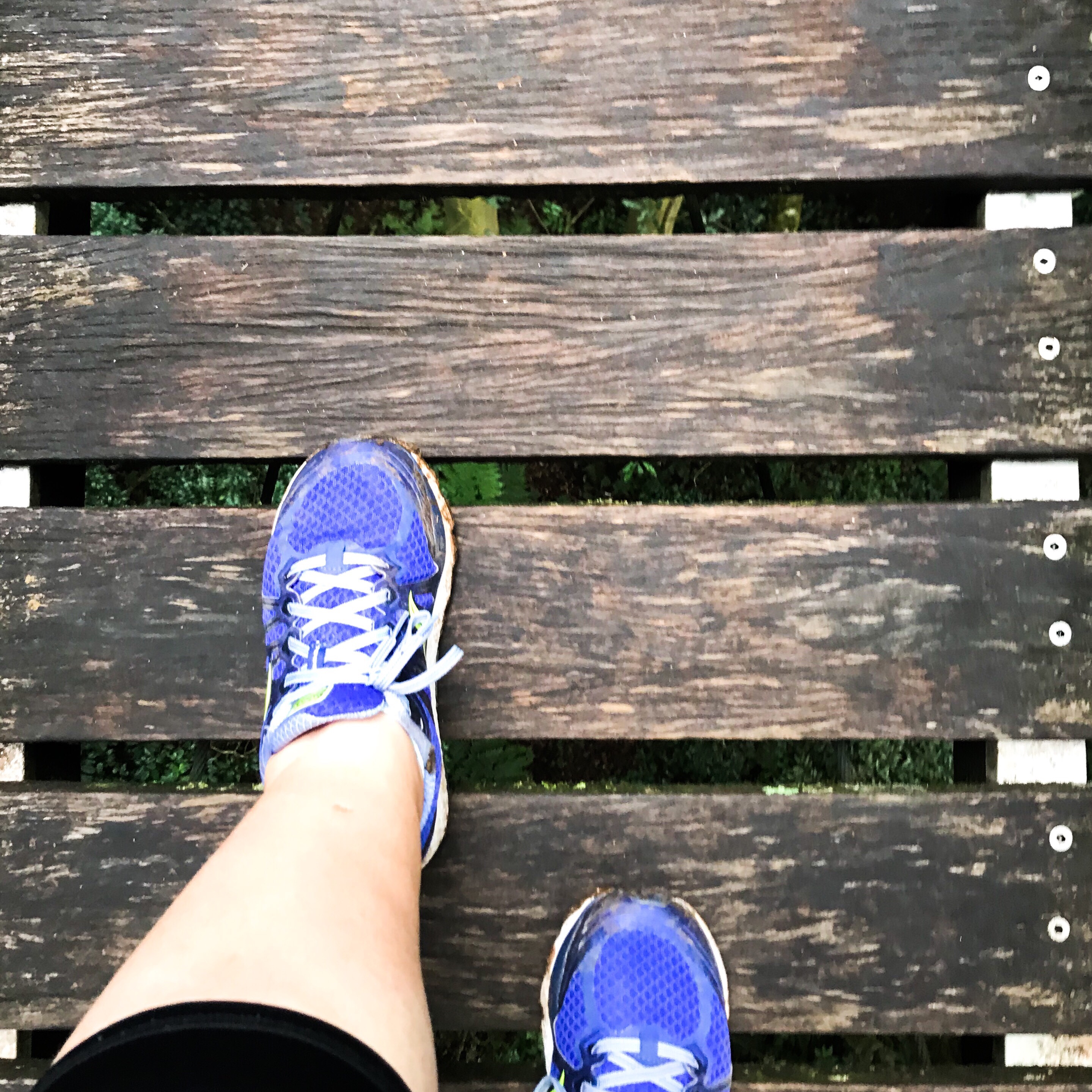 The next day we headed off around 11am for our long walk. We decided to have a crack at the Box Forest Circuit which is a down & up (my technical terms) walk.

It’s an incredibly old forest that has Antartic Beech trees. I don’t think this guy was one of them, but it was just MASSIVE! 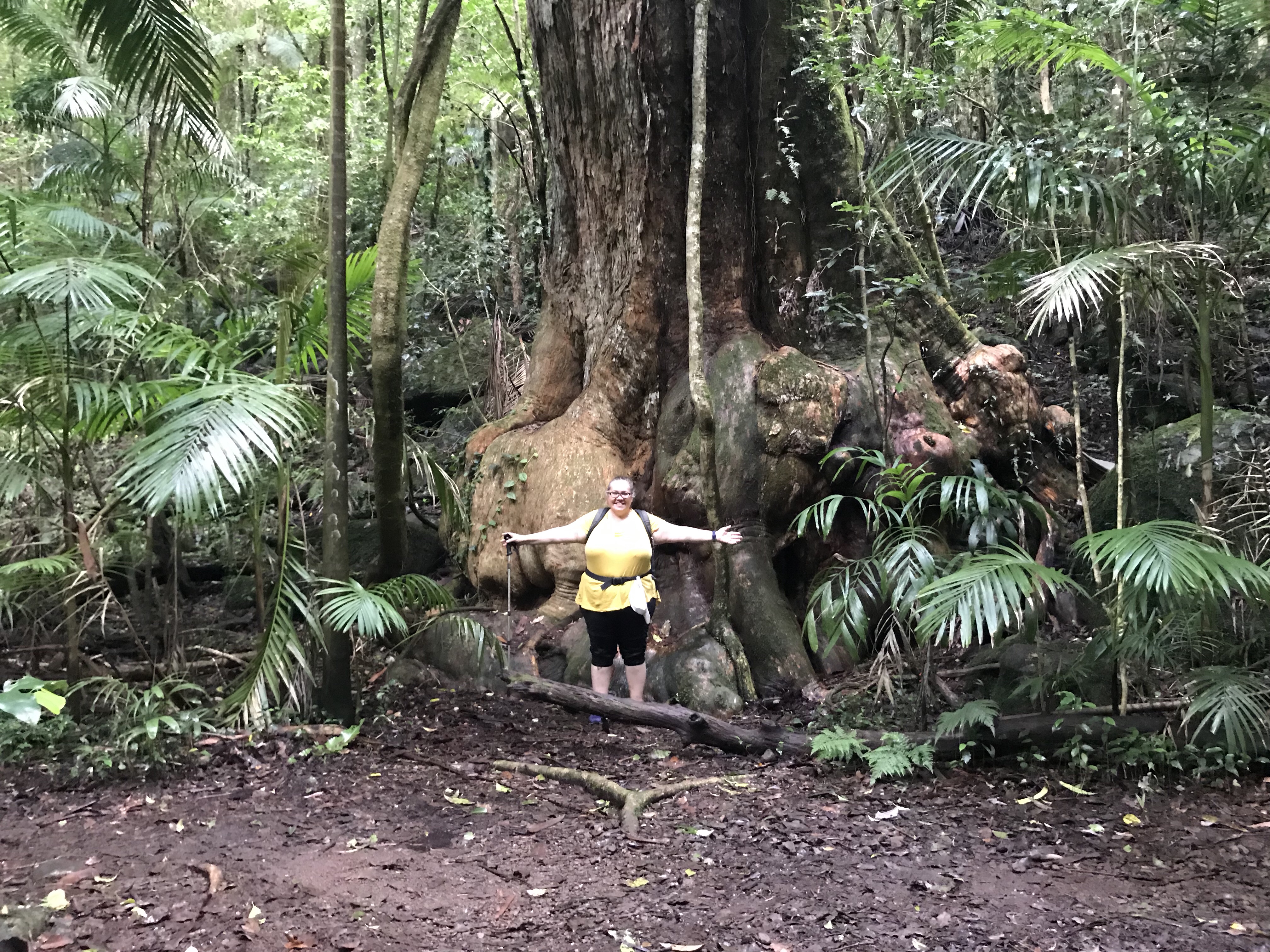 There’s a really good chance I didn’t read the ‘about’ this walk very well as there were more creek crossings than I thought there’d be. I’m not exactly super fit so jumping across running water isn’t my idea of a great time. But we managed the at least three creek crossings without falling in. It had been raining steadily for a week so I’m unsurprised at the volume of water. 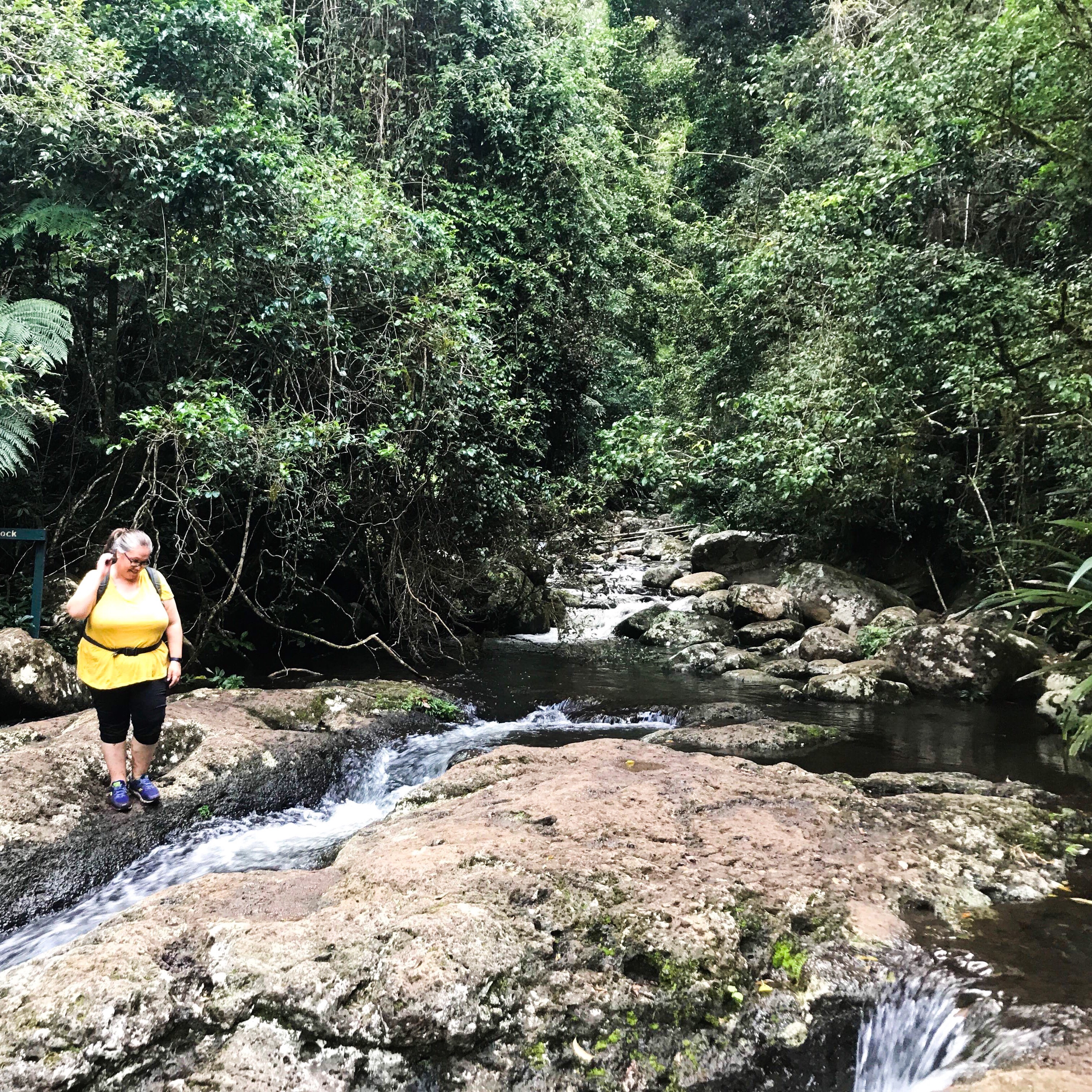 My FitBit recorded our overall walk at 17.5km, so I’m not 100% sure how the mathematics on the signs works.  Perhaps it added a little extra distance given how much mud I was carrying around in my shoes!! 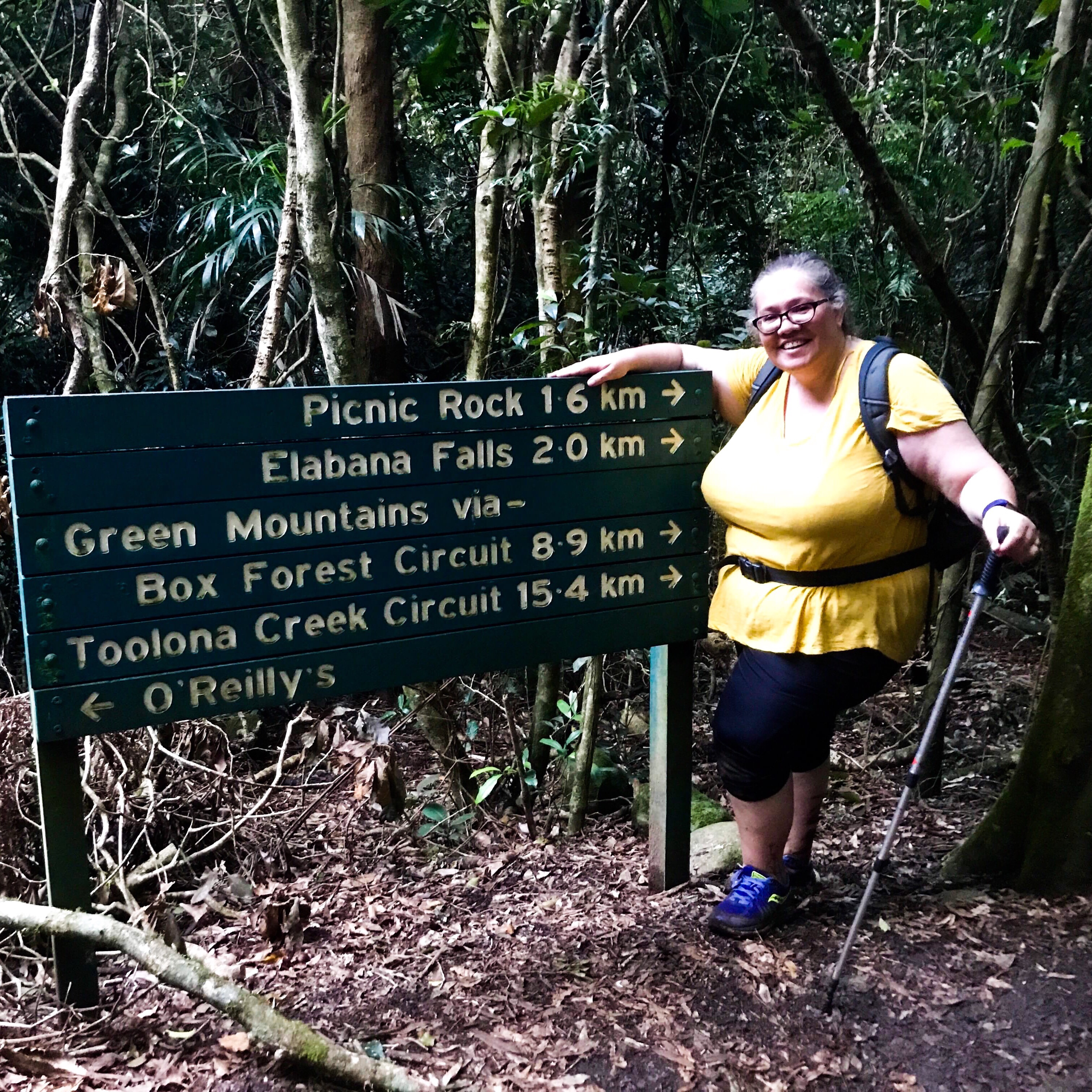 I think the walk was relatively easy for a person of my age and fitness. The signage could definitely be better. At one point there was a very rough looking arrow – the only signage that pointed to what could easily be confused for not a track. We were in two minds, particularly coming off some of the creeks which direction we should head.

In terms of fitness it was definitely challenging. By the last couple of kilometres I was really pushing myself to finish – it’s not like a had a choice – but my feet were dragging more than I was wanting them to. That was probably the reason (that and that it was getting dark) why I ended up looking like this …. 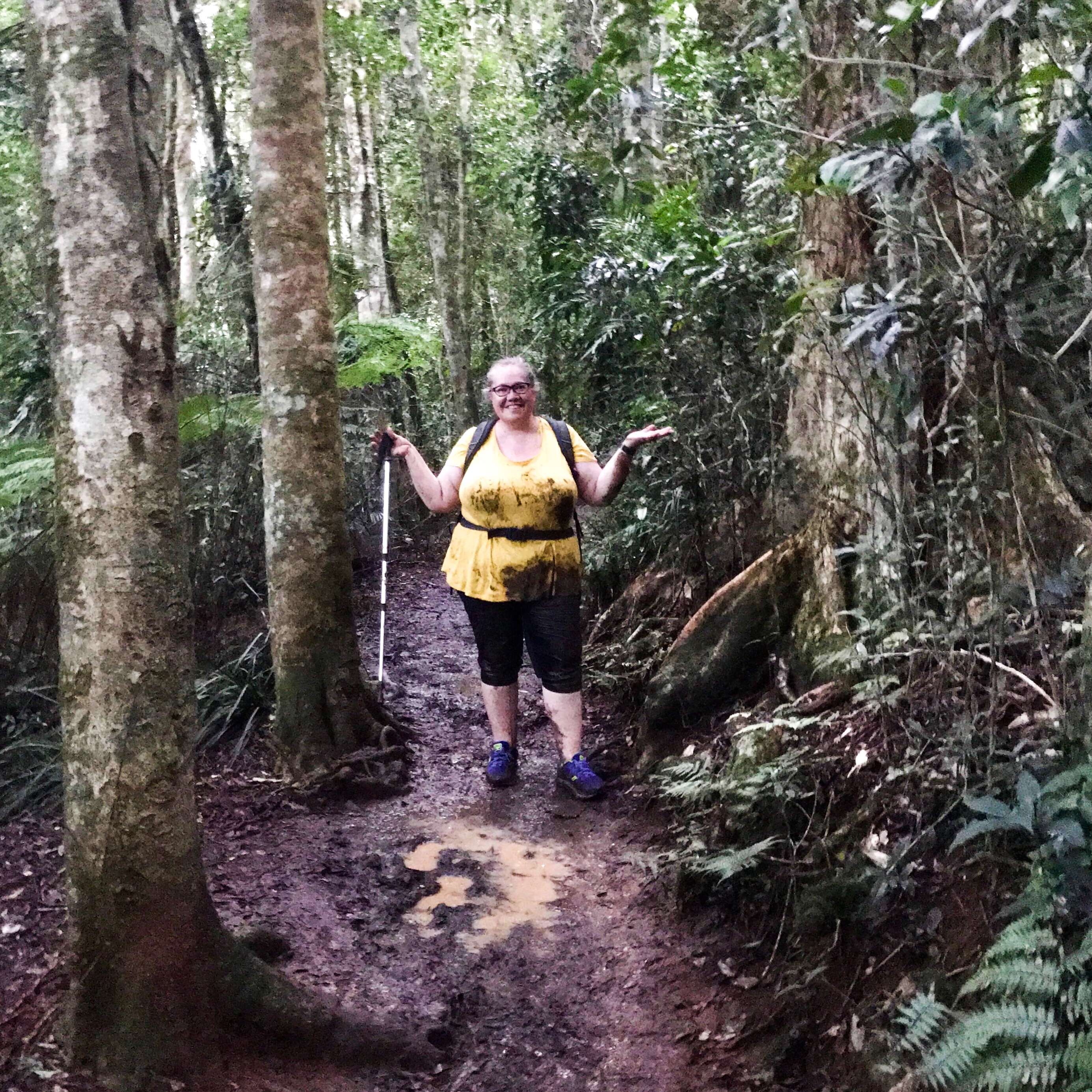 After what was probably one of the worst sleeps ever – just could not relax, the next day we packed up camp and did one of the small walks – Python Rock Walk – on the way back down the hill. It was just a few kilometres long and relatively even. The view reminded me of the Blue Mountains. 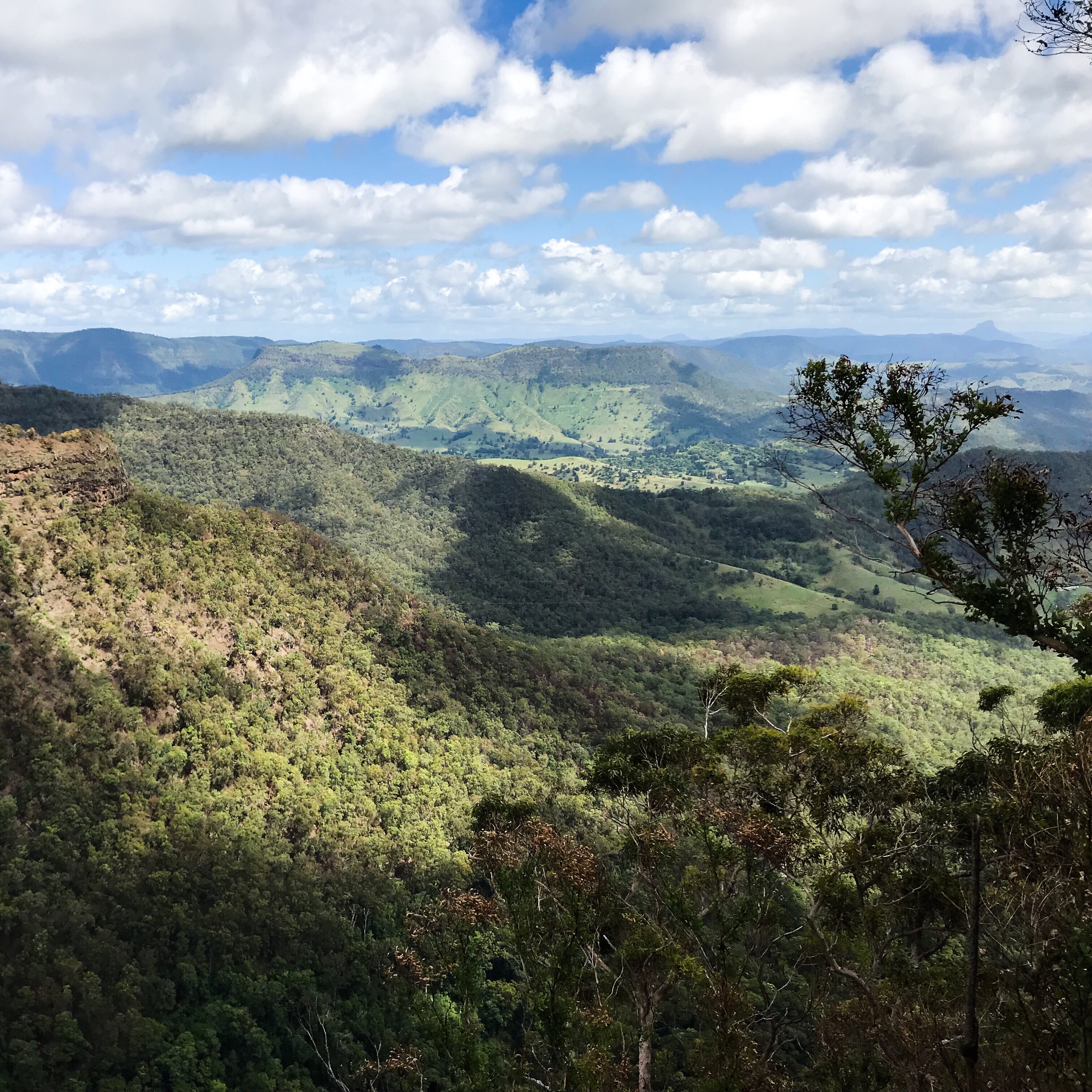 O’Reilly’s is interesting – there were lots of tourist, but there’s really no ‘view’ to speak off when you’re at the top. There may be a view from sections in the resort, but for ordinary peeps, you’re best to head to Python Rock Walk.

I reckon we’ll find ourselves up there again one day soon to tackle some of the other walks that all form part of the Scenic Rim.