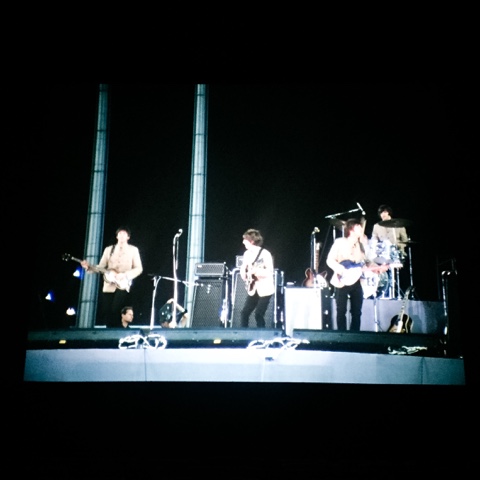 by Leesa WategoSeptember 17, 2016December 26, 2016
We’ve just got home from from seeing 8 Days A Week at Chermside. I wanted to write a quick post because I thoroughly recommend it to everyone.
It will probably have only a short run in cinemas, so you will only have a brief window to see it.
I don’t think the following could be described as spoilers because we all know the Beatles story, but I noted the  following:
I was so taken with the beautiful youth of these four young men. Their energy, passion, exhuberance and genuine affection for each other. You get no sense that anything was contrived. There was no concern for brand or reputation. Nothing was rehearsed. They were talented and hardworking musicians who in the early life of the Beatles mania just ‘went for it’. There’s no polish and it’s so refreshing.
When I was born in 1969 their last concert had only been three years beforehand and their music was always a part of my life. It was always played in the Brisbane radio stations my parents listened to. While I grew up listening to their music, I’m definitely no music history buff so I had no concept of their role in history and popular culture, how Beatles Mania was indeed a historical first, nor the way in which their reception fit within the historical context (post-war, mid-social-change) of the time.
If you do manage to get to the cinema to see the film, you’ll also see a 30-minute cinema release only film of their concert at Shea Stadium in New York (historically significant as the first of the stadium concerts). I thoroughly recommend you don’t miss it. Not just for the footage of fans literally fainting and ‘losing it’ – they’re a classic!! – but for the joy and affection each of these young men have for each other playing their set. You can’t help but laugh along with John as he has and George are playing the last song of the set.
8 Days A Week is the story of the touring history of The Beatles. I don’t know how long it’s in cinemas for, but do yourself a favour.

Image: A still from the Shea Stadium concert film